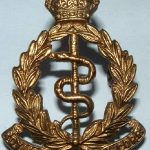 In 1901 James enlisted into the Royal Army Medical Corps and went on to serve in the Anglo-Boer war where he remained for eighteen months and was awarded the Queen’s South Africa Medal with clasps. On 6th October 1902 his service was complete and he was discharged from the army and in the same month he married Margaret Trought in Manchester, they went on to have four children. James was employed as a rectifier of vitriol.

On the breakout of war James, now a warehouseman, enlisted again, this time as a special reserve and attested in Manchester back into the Royal Army Medical Corps. Following a brief period of training James moved to Salisbury Plain where he fell ill and was admitted to the Netheravon Hospital. On 24th September 1915 he was discharged from the army as being ‘unfit for military service’ but he remained in hospital and died of tuberculosis on 1st October. He is buried in the graveyard of All Saints Church, Netheravon.